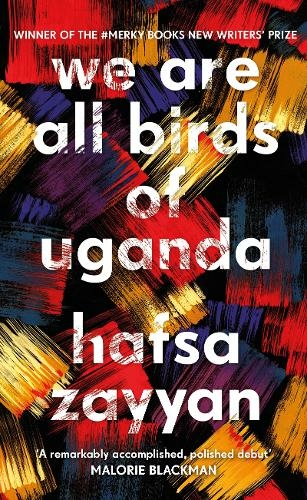 “We were trying to exterminate them for a while [but] you can’t exactly stop birds from flying, can you? […] In a way, I suppose we are all birds of Uganda.” What a beautiful metaphor used by Hafsa Zayyan in her truly accomplished debut novel broaching the subject of migration and its consequences.

In today’ society where so many of us travel to and live in different countries to the one we were born in (including myself!), you would really hope that racism would be eradicated. Through a very well crafted love story, Hafsa Zayyan (winner of the Merky Books New Writer’s Prize) shows us that it is unfortunately not the case.

Cleverly switching from the contemporary story of Sameer, 26 year old London city lawyer born in Leicester, to the life of his grandfather Hasan in Uganda in the 20th century, Hafsa is offering us a very astute parallel between two worlds, both being quite different but paradoxically so similar, filled with complex characters mirroring each other.

Working relentlessly day and night at the law firm, Sameer is selected to go to Singapore and help set up a new office there. He shies away from breaking the news to his parents. He knows that they will refuse to understand this, as they expect him to take over the family business and marry a girl from the local mosque according to family tradition and culture. Trying to convince himself this move is a great opportunity, something still nags at him but he cannot figure out what. In the weeks preceding his departure, tragedy strikes one of his best friends back in Leicester, forcing him to feel the devastation and face the wrath of his parents. When an old family friend who knew and lived with his grandfather in Uganda comes and visits, Sameer suddenly feels the need to go and discover this amazing country, and maybe find the answer to what is troubling him deep down.

As for Hasan, the reader gets to discover him through the love letters he wrote to his departed wife Amira. With him, we are transported to Uganda in the 20th century (between 1945 and 1981), witnessing Sameer’s origins alongside the major events of this time there: independence from Britain, the rise of nationalism and racial tensions, political coup and pure hatred of non African, the expulsion of Asians out of Uganda, before being allowed back in after the end of the dictatorship.

Producing an easy read out of a heavy subject like racism is no easy feat. Mixing stereotypes and perception, past and present, history and fiction, love and betrayal, Hafsa wittily makes us face the reality of racism through many of its countless faces: from the unconscious daily bias, workplace discrimination, familial beliefs and expectations, social media slander, to the blatant hatred and violence towards people of a different colour. What is also brilliantly depicted is the irony of it all: even the victims of racism are guilty of perpetuating it in a different way; and everyone has its own “motivation”: tradition, culture, obligation, wealth redistribution, fear, love, hate etc.

How do you make things better? How do you consciously stop the bias, even an unconscious one? Have things really changed between Uganda in the 1970s and England today?

A truly thought provoking novel which makes you wonder and question yourself and the world long after putting it down. A real success. I thoroughly enjoyed it, highly recommend it and cannot wait to read Hafsa’s next work.

Thank you very much to Net Galley and Merky Books for sharing this beautiful story with me even though I requested it after publication. Thank you Hafsa Zayyan for captivating us with your words.

Book published on 21 January 2021
An imprint of Merky Books

Disclaimer: opinions are my own.